Making a positive difference is at the heart of what we do.

From Yirrkala student to filmmaker 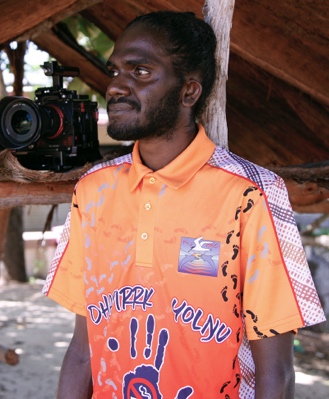 Gutiŋarra Yunupiŋu (or Guti, for short) is a proud Gumatj man and rising star in the Indigenous art community. Alongside being a filmmaker with The Mulka Project, Guti’s personal art gives insight into his rich connections to his community. Guti won the Multimedia Award in the 2019 Telstra National Aboriginal & Torres Strait Islander Art Awards, and most recently, was a finalist in the 2020 NATSIAAs.

Guti was born with profound hearing loss. At age seven, he moved from his homeland Buymarr to Yirrkala in the Northern Territory. Guti was taught Australian Sign Language (Auslan) in school, with his first language being Yolŋu Sign Language (YSL). Guti was one of only two students in his year level to complete Year 12 studies. While in school, Guti spent his final two years gaining work experience at the local arts centre, the Buku-Larrŋgay Mulka Art Centre. After graduating in 2015, Guti was eager to start full-time work with The Mulka Project in the multimedia wing.

The Cotton On Foundation has been a proud partner of Yirrkala since 2013, supporting educational projects such as The Mulka Project. Through his work, Guti has seen first-hand how these educational projects in his community give Indigenous youth the opportunity to embrace and preserve Yolŋu culture.

The Mulka Project is a community hub, and an important cultural archive for the Yolŋu people. It allows Yirrkala’s Indigenous youth to explore and engage with various multimedia platforms, from song composition to filmmaking. Students can also participate in workshops, learn musical instruments, and most importantly, access archived footage and audio of Yolŋu culture and ceremony. The Mulka Project ensures that this 40,000 year old culture is passed down to the next generation, ensuring the continuation of Yolŋu ways.

As a filmmaker with The Mulka Project, Guti’s work sees him travelling to the remote homelands surrounding Yirrkala, connecting with communities and capturing Yolŋu ceremonies on film. 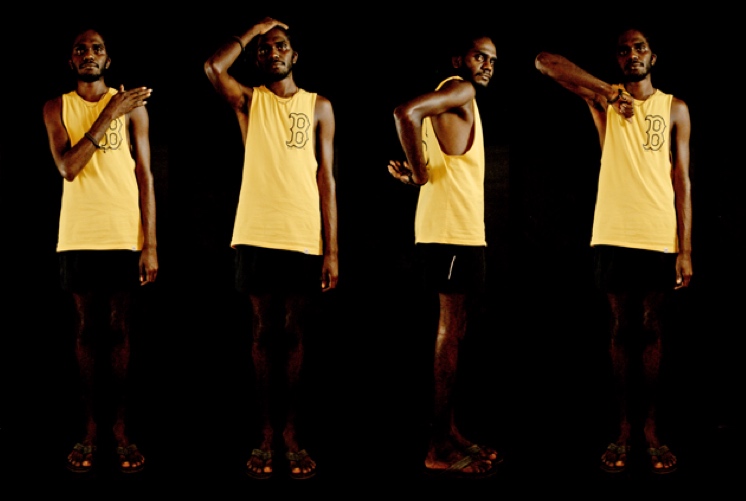 “Ceremony is very important to Yolŋu. I go out to surrounding homelands to film ceremonies, capturing the dance and songs. We then keep this cultural knowledge safe at Mulka and share it with the community.”

Guti’s 2019 award-winning film Gurruṯu'mi Mala explores his connection with his clan and homelands through the Yolŋu kinship system of gurruṯu. Gurruṯu is a system that dictates connection to all Yolŋu; past, present and future. Guti’s film highlights his position in the world of gurruṯu, and how he uses sign language to establish the connection with those close to him.

“My 2019 film piece is about my kinship and my relationships with all of my family members. In this artwork, I use my first language (Yolŋu Sign Language) to demonstrate these connections.”

Yolŋu Sign Language is commonly taught to hearing Yolŋu from a young age, and used when hunting to communicate over distance. Guti’s film captures the importance of barrkuŋu waŋa (language from a distance) in everyday life for his community, as well as giving insight into how he expresses cultural identity.

“My family inspires me; my mothers, grandmothers, my sisters and brothers. It is my family that makes me most happy.”

“I am a Yunupiŋu. We are the tongue of the fire, the flame. The Yunupiŋu's belong to the Gumatj clan. Gumatj take care of the minytji (design) of Bäru. My mari'mu (father’s father) Maŋalay Yunupiŋu shared his knowledge of the Bäru minytji with me and this is the first time that I have painted it.”

We’re grateful to be a small part of Guti’s journey, and cannot wait to see what his future holds.

“I hope to continue making digital artwork and being a successful artist, with exhibitions overseas and travelling.”

If you'd like to know more about the educational projects supported by the Cotton On Foundation in Yirrkala, Northern Territory, you can read more here.

Join today & get
Free Delivery
on your next shop*
No thanks, let me shop!